If you’ve just learned you’re pregnant, you’ve probably got a lot of questions, especially if this is your first child. Are those cramps normal? Will you start craving weird foods? And what about any complications like gestational diabetes, ectopic pregnancy, and preeclampsia?

You’re probably being flooded with lots of stories from the other women in your life, and it may be hard to sort through all that information. It doesn’t have to be stressful, however. We’re here to help you sort through some of your burning questions to let you know what is normal, and when you should schedule an appointment to see us.

Miscarriage is a subject that many women don’t like to discuss, especially if they have lost a child, but it’s important for you to at least know what it is, and how it happens. MedlinePlus states, “A miscarriage is an unexpected loss of pregnancy before the 20th week of pregnancy. Most miscarriages happen very early in the pregnancy, often before a woman even knows she is pregnant.” A miscarriage may happen because of a genetic problem with the fetus, problems with the uterus or cervix, or a chronic disease.

If a miscarriage is suspected, there are a few ways to diagnose it.

According to the US Department of Health and Human Services, “Treatments for pregnancy loss focus on ensuring that the nonviable pregnancy leaves the woman’s body safely and completely. Women going through pregnancy loss are at risk for bleeding, pain, and infection, especially if some of the pregnancy tissue remains behind in the uterus.” 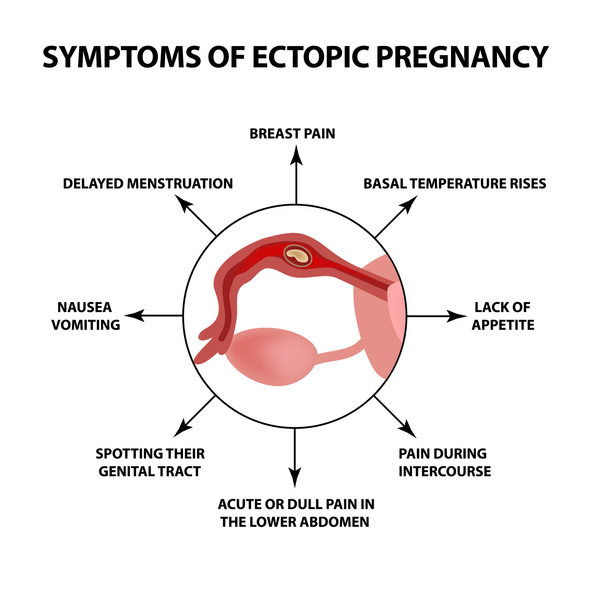 There are several options available to doctors to test for an ectopic pregnancy. These include:

According to the American College of Obstetricians and Gynecologists, “An ectopic pregnancy cannot move or be moved to the uterus, so it always requires treatment. There are two methods used to treat an ectopic pregnancy: 1) medication and 2) surgery. Several weeks of follow-up are required with each treatment.”

In the case of medication, methotrexate is administered through an injection. It will prevent the cells from growing, which will end the pregnancy.

During surgery, the ectopic pregnancy will be removed from the fallopian tube. In some severe cases, the entire tube might be removed.

If you’re not already diagnosed with diabetes, you may be at risk of gestational diabetes. The CDC reports, “Gestational diabetes occurs when your body can’t make enough insulin during your pregnancy. Insulin is a hormone made by your pancreas that acts like a key to let blood sugar into the cells in your body for use as energy.”

There are no real symptoms for gestational diabetes. You’ll have to be tested to know for sure. This usually takes place during the 24th to 28th week of pregnancy.

A blood test is usually all it takes to diagnose gestational diabetes. There are two commonly used tests.

The treatment for gestational diabetes is largely dependent on you. It will require that you:

The lower cervix is where the fetus grows during the pregnancy. During a typical pregnancy, the cervix doesn’t begin to dilate until it’s closer to time for birth. MedlinePlus reports that an incompetent cervix will widen before the baby is due to come.

There aren’t any major symptoms that you will notice, except for bleeding, and possibly an infection.

If left undiagnosed, an incompetent cervix could lead to miscarriage. There are a few treatment options if diagnosed in time, which include:

When in the amniotic sac, the fetus is surrounded by a clear or slightly yellowish liquid called amniotic fluid. Too much or too little amniotic fluid can lead to health problems for the baby. It will be monitored by your doctor throughout the pregnancy.

If you suddenly find your blood pressure rising during pregnancy, even though it was never an issue before you became pregnant, it may be preeclampsia.

This is when preeclampsia has progressed, and the mother starts to have seizures. It is a medical emergency, and the mother will be admitted to the hospital immediately. Magnesium is often administered to help control the seizures.

Schedule An Appointment Today with an OB/GYN In Jackson, MS

It’s crucial that you keep all of your appointments. If you feel like something is wrong, or you’re having symptoms that seem a little off, don’t hesitate to call us and make an appointment. It may be nothing, but it’s better to have it diagnosed by one of our doctors rather than wait. Contact us to make an appointment today.